Best in class LEDS with wide viewing angle, can be installed at any angle.

No degradation in colour and light intensity. Guaranteed 6.000 cd/m² during warranty.

The XL Player is capable of showing .PNG and MPEG. Content can be loaded from your computer, tablet or smartphone.

signage as a service

The built-in driver, XL Control, makes it possible to monitor the screen remote, to control every module and even every individual led. Modular interchangable system. Parts are designed for 15-minute changeover

FOXL is a strategic cooperation between LED XL and FOXCON, based in Rotterdam the Netherlands.

As an advanced high-tech corporation, with revenues in excess of $100Billion, Foxconn Technology Group is better known for it’s work in the area of computers, communications and consumer electronics.

However, for several years now the LED video signage division of the group have been quietly building their reputation and product portfolio, expanding from Asia into Europe. Expertise and experience in thermal management, optical design and high quality manufacturing wil help FOXL to position itself as the premium LED video signage as a service company.

With the help of FOXCONN design and development engineers and R&D bases in Taiwan, USA and China, the European sales and engineering support office for the LED video signage division, we are able to access an unrivalled wealth of technology and innovation. A robust and focussed manufacturing & logistical support structure with gamechangng (financial) services will allow FOXL to offer an ever expanding range of reliable high power LED Video screens to the market. 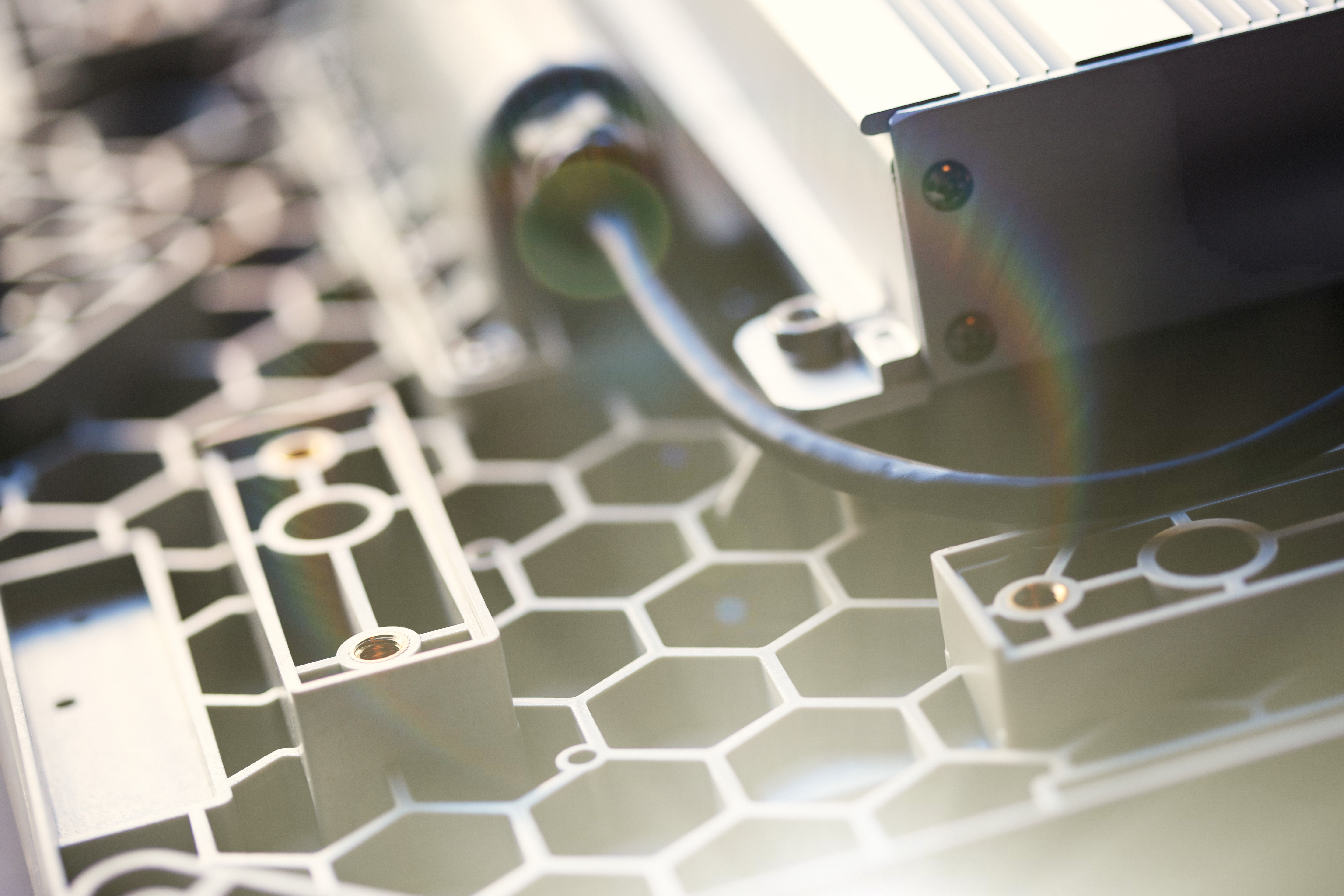 All components are fully developed by FOXL. The first screens are installed with this new modules and running perfect signage campaigns. 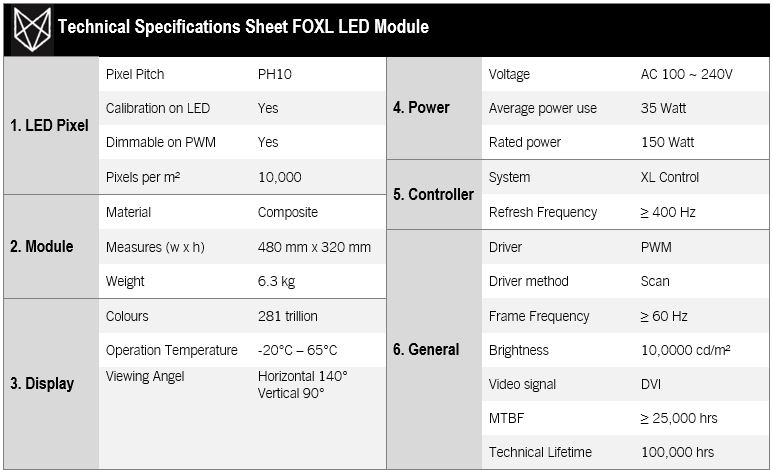 FOXL is the developer and producer of an intelligent outdoor LED system.

The FOXL screen is making a difference. 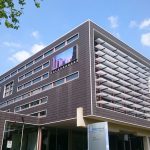 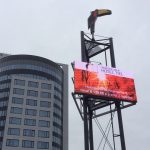 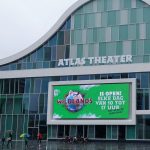 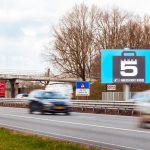 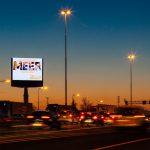 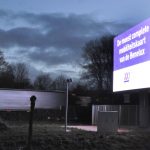 What is a LED screen ?

A LED screen is a video display which uses light-emitting diodes (LED). A LED panel is a small display, or a component of a larger display or screen. They are typically used outdoors in store signs and billboards and in recent years have also become commonly used in destination signs. LED panels are also used as form of lighting, as of general illumination, task lighting, or even stage lighting.

There are two types of LED panels: conventional (using discrete LEDs) and surface-mounted device (SMD) panels. Most outdoor screens and some indoor screens are built around discrete LEDs, also known as individually mounted LEDs. A cluster of red, green and blue diodes is driven together to form a full-color pixel, usually square in shape. These pixels are spaced evenly apart and are measured from center to center for absolute pixel resolution. The largest LED display in the world is over 450 m long and is located in Las Vegas, Nevada covering the Fremont Street Experience . https://www.youtube.com/watch?v=daSM8_ks4Gc

How does it work?

What does degeneration of color mean?

For outdoor use, whereas higher-brightness with direct sunlight on the screen is needed up to 5,000 cd/m². The degeneration colors are depending on the quality (if you can still see the color as they really are in the sunlight at daytime) is approximately 1.25-14% a year. A good quality screen with 6,000 cd/m² after one year must have a ROI of 2 until 3 years to avoid low quality video with very little detail with unhappy advertisement clients. The FOXL screen will always start with 10,000 cd/m² that means it will generate a long lifetime.

Where can we use a LED screen?

Suitable locations for large display panels are identified by several factors such as line of sight, local authority planning requirements (if the installation is to become semi-permanent), vehicular access (trucks carrying the screen, truck-mounted screens, or cranes), cable runs for power and video (accounting for both distance and health and safety requirements), power, suitability of the ground for the location of the screen (if there are no pipes, shallow drains, caves, or tunnels that may not be able to support heavy loads), and overhead obstructions. We also provide if necessary plug and play solutions. The size of the outdoor LED screen displays and LED signs are very important to know to determine the resolution per square meter we have to set for the screen. This is to avoid low quality video with very little detail or a very high quality video that is not necessary (in some cases it depends on the customer´s project type). The variable that decides the LED screen resolution per square meter is called the pixel pitch, which tells us the distance between the LED´s in millimetres. The shorter the distance of the LED´s, the higher the screen resolution per square meter, and a greater distance, the resolution will be less. FOXL will have 10,000 pixels per m2. Other not high end screens will have below 7.000 pixels per m2.

The LED’s are surely the most important quality criteria when it comes to LED video displays. They determine the image quality of the display and are decisive in determining how the image quality is retained over time. The quality characteristics for LED’s are very diverse, and, here too, the maxim applies: the most expensive choice is not always the best choice. To highlight an example from the automobile industry: You are sure to be able to spontaneously list a variety of luxury sedans, though you may not generally consider these when selecting a new vehicle. Price and purpose play major roles in the decision of which model to choose. And also, luxury sedans differ in many ways, although they often all meet the highest quality standards. The quality of a LED is determined primarily by the chip used. It determines the service life of the LED and how the lighting behaviour of the LED changes over time. There are less than 10 mayor Chip manufacturers over the world. The prevailing opinion on the market today is that LED’s are made in 3 classes: high end, outdoor screens and low end screens. However, they are also undeniably the most expensive LED’s on the market by a wide margin. The price of LED’s varies on average from less than one cent per LED to up to 15 cents and more, depending on the type of LED (RGB LED’s with three chips in one housing are often more expensive). An extensive price difference can arise in manufacturing.
The most important factor for purchasing a LED screen and determining which LED’s to choose are: Brightness: The brightness of the LED’s is measured in mcd (milli-candela). The higher the brightness, the better. You can run the display at a lower brightness, thus increasing the service life or increasing visibility during the day when the sun is shining.

The LED chips produced by various manufacturers differentiate themselves through a varying sensitivity to the effects of electrostatic discharge (for example due to contact). Display failures caused by electrostatic discharges can be prevented by implementing safeguarding measures against ESD in the production process. The LED chips listed are indicating the voltages that the LED’s can withstand in case of electrostatic discharges: High end (2000V) and low end 200~800V.
Sensitivity to Temperature Variations: Poor LED chips can fade faster, i.e. their service life can shorten, if they are exposed to high temperature variations. Depending on the country, temperatures can become extremely hot during the summer or cold during the winter. As a result, a poor LED quality could cause premature fading of the overall, expensive LED display. We have a special design of the panel who can resist operation temperature from -20 until 65 Celsius.

The general service life of the LED’s often lies between 50,000 and 100,000 hours. (100,000 hours equates to 10 years of continuous display operation at full white, if no other factors exist which reduce the service life; such as increased heat in the display housing, or operating the LED’s at overvoltage in order to balance brightness reduction. FOXL have a technical lifetime of 100,000 hours.

Below is a table indicating the lighting reductions which arise within the first 10,000 hours by normal use: LED brightness reduction after the first 10,000 hours, sorted by use:
Nichia FOXL Low end
LED 1.25% 4% 14%
FOXL by normal use need 100,000 hours to reach around 50% of its total original brightness, The low end screens will need about 25,000-50,000 hours to reach 50% of its total original brightness. The materials used in the low end LED screens are much less quality than for the FOXL LED panel. The professional screens (compare then as a Ferrari under the LED screens, such as Nichia) will uses around 50% of the energy to burn the LED’s in comparison to FOXL. FOXL will be in compare to the Nichia as an Ferrari, the Mercedes in the LED screens. In the low end LED screens the long-term values for some of the other manufacturers are not available. Many developments in the LED field are so new that long-term values over five, ten, or more years don’t exist yet. If you buy a low end screen you also can not switch panels if there is a failure. You always have to buy an extra 10% panels for the maintenance. This is not necessary with the FOXL panel. With the service life of FOXL, you can run your display for 6 years of continuous operation at full white, although running the screen at full white is never done in reality. If you need a new panel we can send it in a box by airmail. And replace the panel from the front of the LED outdoor screen. If it is mounted to a wall or building very comfortable!

How much does a LED screen or LED display cost?

Why LED screens have different costs and prices?

Everything depends on the customers´ needs. Some customers want the public to see their LED screen from a distance of 10 meters and further, and others from 20 meters and further. The more resolution/sqm a screen has the closer will be the viewing distance without losing detail looking at the screen closely. For that we always need the client to answer us several questions to determine the right LED screen size and resolution and come with the right proposal. Nothing is predetermined, but based on the needs of the client. We advise and deliver plug and play solutions.
If you want to know what are our prices per square meter please let us know and give us a call, or contact us by writing an email. We can send you our prices and you can figure out what will be the right size and right resolution for your LED screen that fits your budget. If investing in FOXL LED’s the initial investment is about 25% to 50% of High end (Nichia). When advertisers want to publish their products on the screen, of course quality is important but in practical terms the selling price of the commercial space on the screen will be the same if used Nichia, they just want to be seen and promote their products and or services on the screen for 10 years 24/7 without problems . What is important for the publicity clients is the resolution, if it doesn’t look pixelated they do see that as a plus and will attract more advertisers because the better the resolution the higher the impact of the advertisement and the higher the company’s goodwill of the product announced. Also for Nichia and FOXL the ROI is one and a half to twice the time in comparison to low end LED Screens LED’s which is two until three years at least.